Life for Jet Black and his friends is just about to get more complicated. Feeling better than he has in a long time, Jet returns to school only to find that things are far different than when he left. Jet is forced to make some tough decisions for the sake of Chadwick’s. As things begin to get settled, new teachers are brought to the school and for the first time, magic and special trainings are taught during some of his classes. He still lacks a proper weapon and he and his friends must find the third piece of the Phoenix. The adventure is just beginning.

L. Scott Clark continues to closely working with Obsidian Wolf Publishing to bring out this second book.  We would also like to give a massive shout-out to Miblart for providing such a great second book cover.

Back of the Book Blurb:

Deception can be seen in many diverse forms.

The fallout can be disastrous.

Not everything is what it seems.

Chadwick’s Boarding school has changed over the last few months since Jet Black and his friends have discovered Elemental magic and how to use it. But things are about to transform like never before. Bringing in new teachers, new ideas, and an open campus willing to learn magic is breathtaking.

The Sorcerer’s Guide, an ancient magical book, continues to be a mentor for Jet Black, and there is so much to learn and understand. This book only opens at his touch, but it helps Jet navigate the complexities of a new magical world.

The Rivalry is peaking, and war is on the horizon, but so much remains hidden. Jet has collected two pieces of the Phoenix, an artifact that was broken into six fragments. Four parts remain, and Jet and his friends are trying to keep ahead of Jet’s nemesis, Shane Fallon, the leader of Runic magic.

Despite being healed through a gift while in the Antarctic, Jet still lacks a proper weapon. Magic can only protect him so far. He needs something special, and only a one-of-a-kind weapon will do. Jet is led to a popular destination, but he can’t accomplish his goals on his own.

The Runics and Elementals are called to the location of the third missing piece. What awaits them is mysterious and treacherous. Will either escape unscathed with the prize, treasures, and offerings available?

Another great way to support is by leaving an Amazon Review. Reviews help readers, like you, to be able to see certain books more feely on Amazon.
Please consider signing up for a Newsletter by Author L. Scott Clark. The link will take you to his author website.

Book 1:  Path of the Phoenix 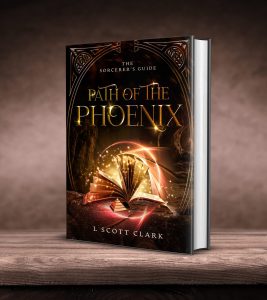 16-year-old Jet Black must learn elemental magic and discover the meaning of a series of natural disasters from a book with a mind of its own. Path of the Phoenix by L. Scott Clark is a YA Fantasy. 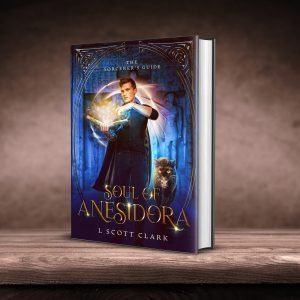 Life-shattering discoveries by Jet Black about magic and his past will call into question everything he knows as he races against time to learn why a predator stalks Chadwicks Boarding School.